ULTRAKILL is a fast-paced ultraviolent old school FPS that fuses together classic shooters like Quake, modern shooters like Doom (2016) and character action games like Devil May Cry. Mankind has gone extinct and the only beings left on earth are machines fueled by blood. But now that blood is starting to run out on the surface Machines are racing to the depths of Hell in search of more. 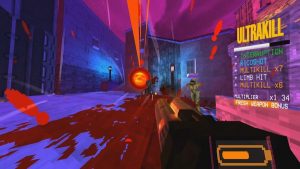